As I was mentioning last week, on the 3rd of May I’ve ran in Breda my first Wings For Life World Run race.

As this was my first time in Breda, I’ve decided to get there the day before the race and have some spare time for seeing the place and getting in the mood of the race. While visiting the city Center was an easy task (Breda didn’t seem to be a very big city), getting in the right mood for the race was a more difficult task! Except a few posters here and there advertising the race and an under construction stage in the Grote Markt, there weren’t any serious signs that next day more than 2000 runners will run in a global event. 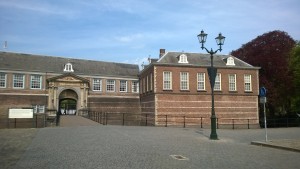 Kasteel van Breda – the starting point of the race 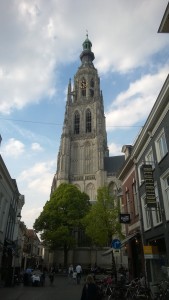 Sunday morning… race day and the start is at an unusually late hour… Luckily I have to go to the Gemeente to pick up my bib. Worried that it may get crowded I follow the organizer’s advice and get there early… it’s around 9:00 AM and I managed to get my bib number in under 5 minutes… Back at the hotel and it’s time for breakfast… a very long one as I have plenty of time to kill. Back in the room and I can’t find my place. I need to move. I try on the short sleeve KWF t-shirt and decide to go out to see how’s the temperature. It started raining and it’s a bit chilly… 7 years of sun in Cyprus left their mark on me. I go up and change to a long sleeve t-shirt. I’m impatient (no surprise there) and want to run…

Around 12:00 I leave the hotel and have a short walk to the Kasteel van Breda, the starting point of the race. 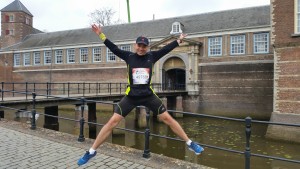 I have a last chat with my girlfriend, one last GoPro lesson, we find a place for her and I enter the castle. I’m a bit sorry for not having my phone with me as there were some good opportunities for some photos: the inner court of the castle, the catcher cars and some (Dutch) celebrities out of which I’ve recognized only Ricardo van Rhijn (Ajax football player).

The race starts as expected at 13:00 and is probably one of the worst starts I’ve witnessed in my amateur athlete career. About 200-300 meters into the race the road got narrower and  became a nice bottle neck for the 2000+ runners which had to take a nice crowded stroll (check the video below recorded by my paparazzi if you don’t believe me).

Also, I’m not sure how the split into starting groups was done… initially I’ve estimated I’ll be running 32km (ended up running 40km before being caught by the catcher car) and still had quite a few runners in front of me… among them people who seemed to be on a leisure cruise, one guy who stopped after about 300m in the middle of the road (NOT KIDDING) to tie his shoe laces and his friends felt obliged to stop in front of me and wait for the poor fella – a very good occasion to get a very nice push which almost knocked me to the ground and led to a nice chat with the “running buddy” who pushed me.

Luckily, I’ve survived the start and managed to get immediately in a very good pace (the push must have helped), which actually worried me a little – although I knew the race course was quite flat, the weather during the race wasn’t exactly the best. While The Netherlands doesn’t have mountains, it sure has wind and rain… and on Sunday we had both. By the 20th kilometre I was soaking wet, but doing excellent by picking runners in front of me as rabbits and taking over them if possible. I also have a few guys on my back… I turn and tell the guy behind me not to be shy – we can switch the rabbit role and work together 🙂 He laughs…

For the next few kilometres we play cat and mouse…

By the 30th kilometre I was still in an excellent condition, but lost my rabbit… that’s it, he’s too fast. I also realize that I could actually get to the 38km mark before the catcher car would show up.

I get to the 35th km and there’s my lost rabbit! I shout “I’m back” – we laugh and have a quick hand shake. Now I’m the faster one…

I keep running and the 38th and 39th kms are the most difficult ones feeling my legs a bit tired, but seeing the catcher car behind me does miracles: I actually manage to accelerate a bit and I’m running under 5 minutes/km again.

I’m caught up by Tim Coronel and his catcher car just before the 40km mark (officially I ran 39.96km) which was a bit frustrating, but still an amazing feeling. About 10 runners gather at the 40th km to wait for the bus… we never met before, but shake hands, congratulate one another and talk about running like we’d be old friends. That’s why I love running!

The bus finally arrives, we all get back to Breda and the event is over for this year.

I have mixed feelings. I know I did great – 40km in 3:01 and the 10th runner in The Netherlands. I also really loved the concept of the race, it’s spirit and most of all what it stood for… it’s such a small thing to run a race and pay an entrance fee, but the overall result and amount raised could make a big difference for those affected by spinal cord injury. For this, I can only say a big “thank you” to all organizers for managing such a big event and directing 100% of the entrance fees to spinal cord injury research.

On the other hand I believe the organization in Breda could have been better especially from the communication point of view (and I’m not the only one): while the other local events were posting plenty of updates online and provided photos and videos from the events within hours, there were no or very few updates coming from Breda although plenty of people had question.

Thank you Wings for Life for a great event!

I will be back!

Below’s my Strava activity for Wings for Life and the video from the event (thank’s to my paparazzi for recording and taking some pics for me).

Until next time, happy running!