The memories are still fresh, my muscles are still aching and the after race beer still didn’t do it’s magic… so before I get busy with something else, here’s how my first ever Olympic Distance triathlon went…

TriAmsterdam Olympic Distance didn’t happen by accident or just because I was getting bored… I’ve decided to do it after I’ve signed up for Gdynia Ironman 70.3 which will take place on 6th of August. So the Olympic Distance in Amsterdam was in my opinion a good test in order to understand what I need to improve in the little time left.

The months leading to the race I’ve been focusing mostly on swimming and cycling as those are in the same order the weakest disciplines for me. I’ve done my kilometers (although one of my friends says that if you’re still married you’re not training hard enough) so I was rather confident. Despite being my first Olympic Distance race and not having any previous reference point the optimist in me wanted a sub 2:30 triathlon… the math was simple: 30 minutes swim, 30km/h average on the bike so a 1:20:00 for the bike split and then a max 45 minutes for the run at a 4:30/km pace. Transitions? What are those? I’ll just fly though them :))

Race day, early wake up despite having checked in my bike the previous evening… I feel a bit nervous and despite trying to hide it apparently it’s obvious for my girlfriend. After all unlike running you have 3 disciplines where something can go wrong.

Around 8:10 we’re at the start of the race… I get into the transition area, prepare my cycling and running shoes, arrange all the needed things on the towel next to the bike and get into my wetsuit for the first time at a race. 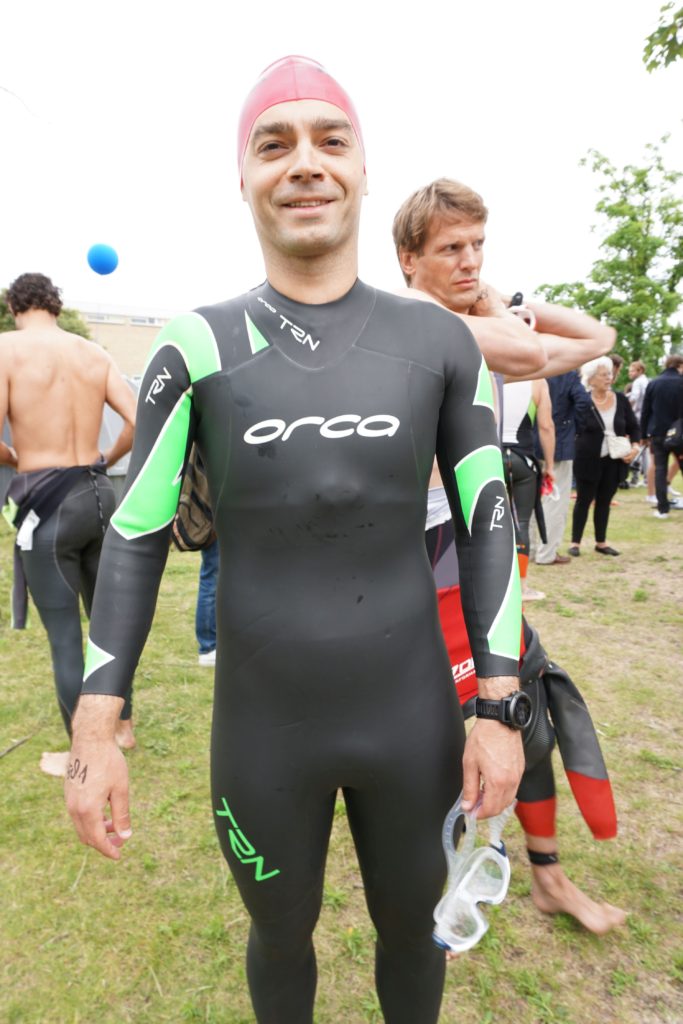 The time is ticking at the start of the race approaches… my paparazzi (aka girlfriend) is worried that other guys are wearing the same wetsuit as I am so how will she recognize me? “By the red swimming cap” I answer… although nervous I still didn’t lose my sense of humor 🙂

9:00 sharp and the first competitors for the Olympic distance hit the water. It’s a rolling start and I join the 30:00 group. I’m in the water and for the first time during a race I swim with my head in the water (training helps)… I get on a good trajectory and find a good rhythm. There are occasional “minor” bumps into other people, but nothing serious (or so I think). I’m staying close to the buoys and tell myself that it’s not so bad as I expected it. 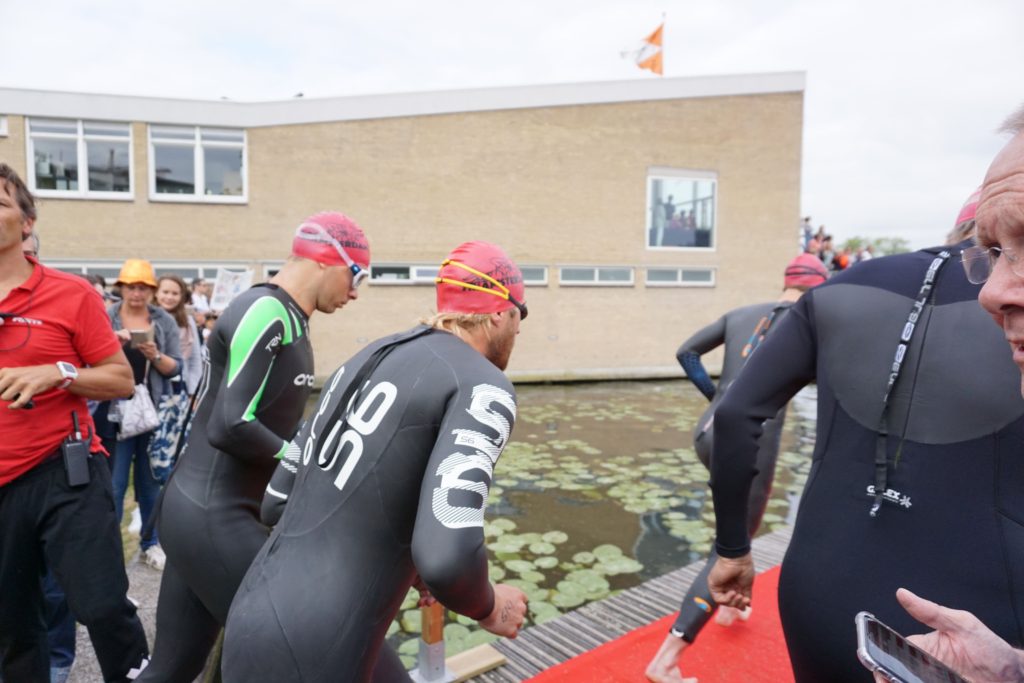 I manage to turn nicely around the buoys at 650m and think that the worst is probably behind me. How wrong I was… after probably another 100m some guy from behind who was almost pulling my legs to get on top of me passes finally in front of me and hits me nicely twice in the head with his legs. My googles are off and I need a quick stop to readjust them and “salute” the fella… #$#$!!!

I’m trying to find my rhythm again and also a proper trajectory… the rhythm is found, but when I take a look to see where am I I realize I’m a bit off the optimal route… “Come on Andrei! you can do it” I tell myself and keep going.

Finally the finish of the swim is in front of me! I get out of the water, take a look at my watch and realize that I’ve made a rookie mistake: I’ve forgot to lock the watch! During the swim one of the many contacts with the other swimmers paused my Garmin. Shit!

I run to the bike, take off my wetsuit, try to dry myself a bit with the towel and put my cycling shoes on… despite having practiced getting on the bike with the shoes already connected to the bike, the start area of the bike course is narrow and starts with some turns on a narrow “no pass” bridge… so better to avoid any nasty situations. 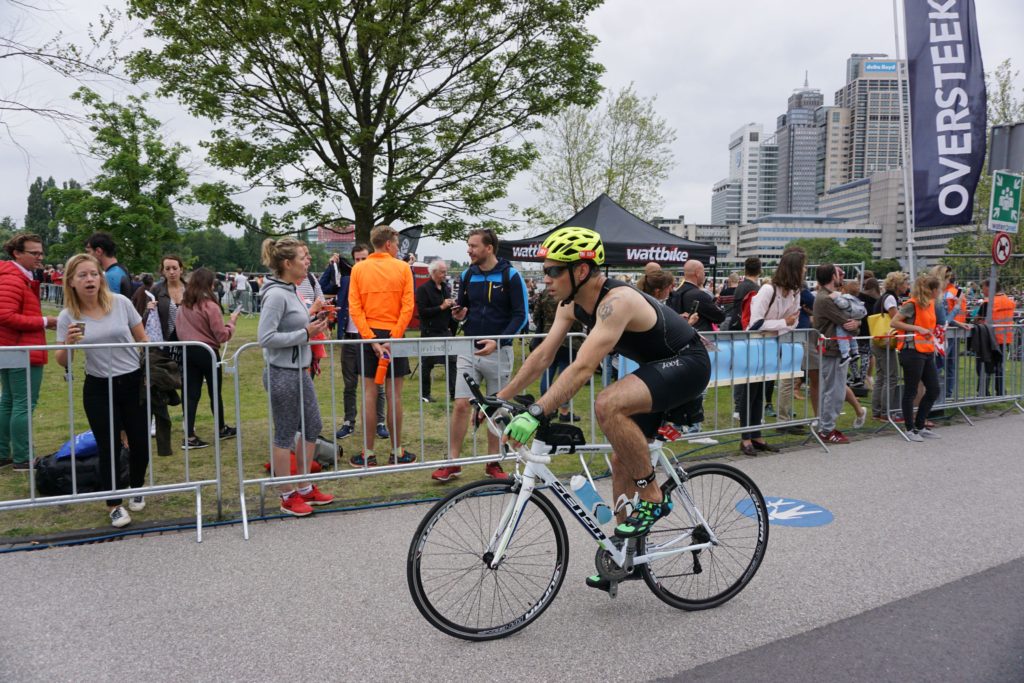 The bike course goes on the way to Utrecht and some parts are along the Amstel… I start using the aerobars and over take quite a few guys in front of me. This feels great! I try to look at the watch to understand what distance I’ve covered so far and what speed do I have.

Apparently the Garmin Triathlon app “sucks” – no speed or distance displayed… Whatever! Who needs a watch? I’ll just enjoy it and push as fast as I can.

Based on the course description and race briefing I know I’m already past the half way. We’re returning to Amsterdam and there’s a nice head wind no matter where we turn. I feel I’m slowing down, but try to push as much as I can. 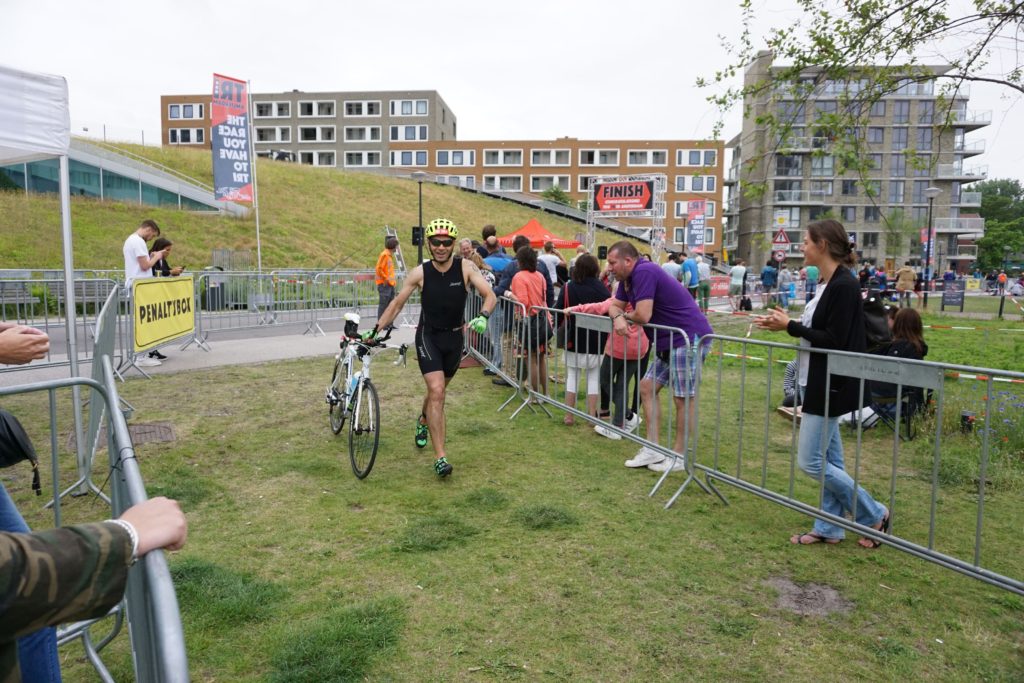 I arrive back at the transition area, press Lap on my Garmin and what do you know: apparently I didn’t push hard enough on it when getting on the bike. That’s why no speed or distance info on my 41km long Transition 1. Damn it Andrei! Wake up!

I leave the bike at my place, take off my helmet, switch to running shoes, grab my energy gels and I’m off for the run. I make sure to press Lap properly on my Garmin and finally I’m recording properly one activity. 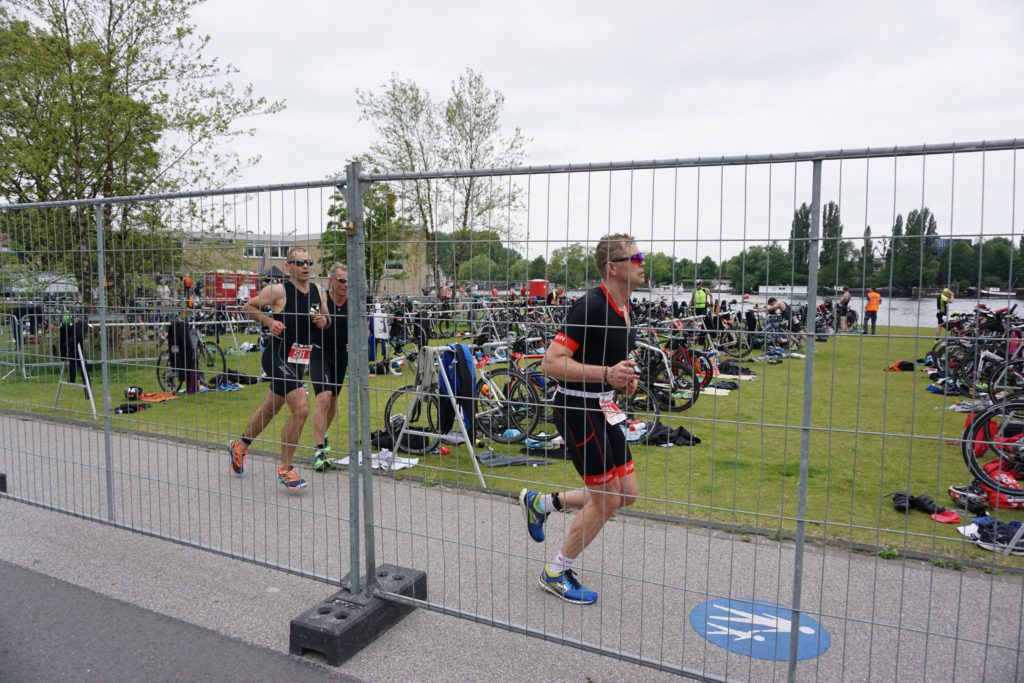 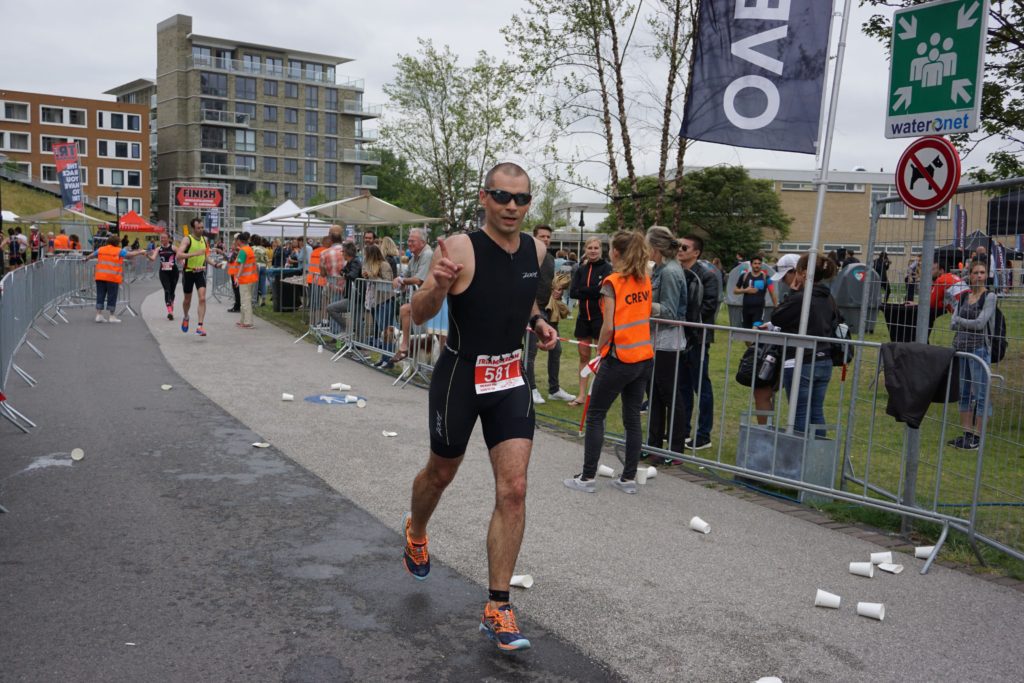 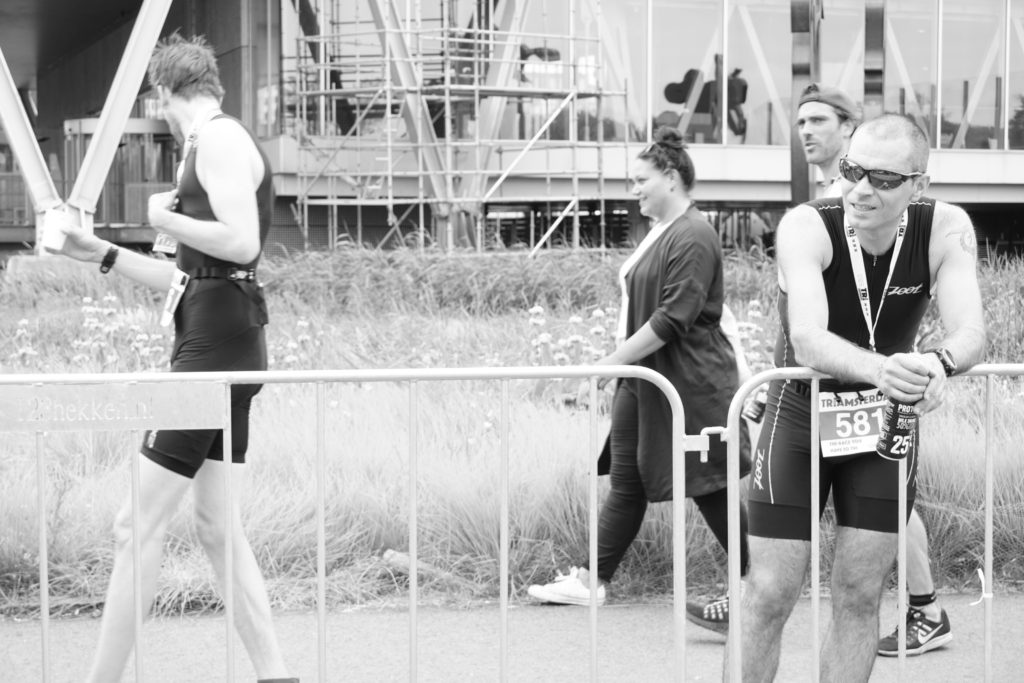 My Garmin shows me a super positive 2:18 time, but what’s my real time? Luckily the organizers arranged social sharing for the result, so I reach for my phone to see that my official time is 2:37:10… hmmm… over 2:30:00.

Few hours after the race with a cooler mind (beer helps) and with the official split times in front of me I understand it’s not such a terrible result.

What did I learn from this?

All in all a good experience at a well organized event – I would definitely recommend TriAmsterdam to anyone interested in triathlons.

Although happy with my first Olympic Distance race and the result, as always there are things which can be improved. Hope the 7 weeks left until Gdynia Ironman 70.3 will be enough to improve.

Below are the Strava activities for the race.