With a bit of delay caused by a well deserved vacation in Stockholm after the marathon race and plenty of work immediately after, here’s my adventure at what was my best marathon so far.

Stockholm Marathon 2015 was the first event to which I’ve had to travel outside the country of residence. I’ve arrived in Stockholm on Friday, one day before the race (the first one I can remember which takes place on a Saturday and not the usual Sunday) and although I was a bit worried that just one day may be too little before the race, the time proved to be more than enough.

After a quick check-in at our accommodation place, we headed to the Olympic Stadium where the marathon expo was taking place.

BIB pick up area at the Marathon Expo

As expected, ASICS, the main sponsor of the race had it’s lion’s share at the marathon expo – about half the space. I didn’t buy anything although it was very tempting and I felt like a kid in the candy shop. Running shoes, t-shirts, shorts, jackets, running backpacks etc – they had all the bits & pieces needed for running! They even brought their running analysis lab at the expo. 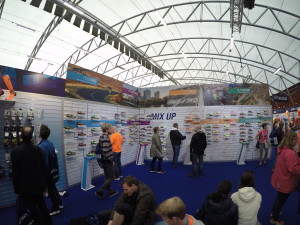 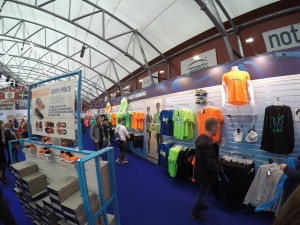 Besides ASICS there were plenty of other companies trying to lure you into spending your pennies at their booth and this was a good occasion to break the piggy bank as all of the merchants had discounts. 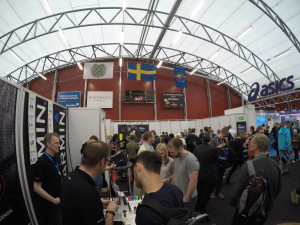 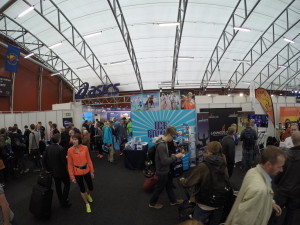 Of course, no marathon expo is complete without other marathons around the world trying to convince you that their race is the best, their medal is the prettiest and the biggest you’ll ever get.

Also a first for me, I’ve decided to visit the pasta party where I’ve had a serious session of carbo-loading. The day at the Marathon Expo ended with a guided tour of the Olympic Stadium, which was a good occasion to learn more about it’s history.

Another race placed at a convenient hour… 12:00! Why can’t there be more races like this? I wake up, eat, have my cup of tea and start dressing. I keep looking at the weather forecast and it’s difficult to take the rain out of the picture. I keep telling myself it’s end of May and I’m not made of sugar… plus I should be getting warm during the run.

We leave before 11:00 trying to be in time for the clothes bag drop off… we take the T- Bana, the Stockholm subway. During the ride I hear Dutch next to me – I say hi and we chat a bit – 2 guys from Groningen running for the first time Stockholm Marathon. We arrive at the Stadium metro station and so do some other few thousands of people. Of course we’re late at the clothes drop off, but we’re not the only ones so the volunteers keep taking our bags. Some Italian guy is asking the boy at the baggage drop off if the bags will stay in the rain… I ask him “what ran?” Who am I kidding? The sky is getting darker and darker…

I warm up practicing my running skills between lots of people… finally it’s 11:45 and I have to get to my starting area. I get in and decide to search for the 3:15 pacing team… they’re in front so I start moving ahead – feels like I’m at a concert trying to get in front 🙂

I finally have the pacing team in clear sight… 12:00 and the race is on!

Unlike the previous marathons, the starting zone is wide and although there are plenty of runners you can actually run. I quickly get in my pace, try to look for my paparazzi (no chance to see her in the crowd), run some more and there’s no pacing team in sight! I look at my watch and realize I’ve started fast – I turn my head and see them behind.

I don’t want to slow down and feel confident – I keep running. A few minuted into the race the obvious happens – it starts raining. It’s just a drizzle so it’s actually nice – I’ve had plenty of that  while training in The Netherlands.
The first “lap” of the run passes quickly and easily… 17km of “sight seeing” – the Royal Theater, the Royal Palace, the City Hall, high fives with some spectators, smiling for pictures… this feels easy.

The second lap takes us immediately to Djugarden park… the place is nice, but not as flat as my Dutch training grounds. I pass the half marathon mark smiling at the camera guys… 1:33 for my half-marathon point. 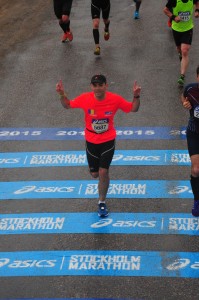 Immediately after I see the weirdest “hidration” point I ever saw during a race.. PICKLES! Yes, you read well… are they kidding me? Must be some Swedish thing! The rain becomes stronger and more annoying. We pass by Nordiska and Vassa Museum and we’re back in the city. I already know the course and I feel I’m on the way to a good result.

Some more high 5s, some more smiles for the camera and I reach the 32nd km – it bring me bad memories as in Amsterdam I had to stop to apply Ice Power on a stiff calf. I’m still fine, but it’s the first km of the race ran in more than 5 minutes. I look at the watch and tell myself that 5 mins/km for the last 10k is not bad and would still mean a sub 3:20 marathon.

But as usual, my legs don’t listen to my brain… I keep accelerating again. The rain is at it’s worse when we pass the city hall for the second time… I’m soaked, it doesn’t matter anymore.

Soon enough the stadium is in sight… time to take the flag out so my paparazzi could spot me 🙂 I’m tired, but still find some resources to run faster and smile for the photos – maybe this time I’ll look normal in the official photos. 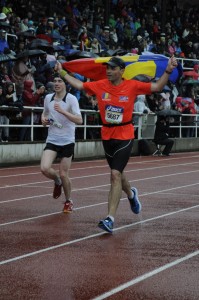 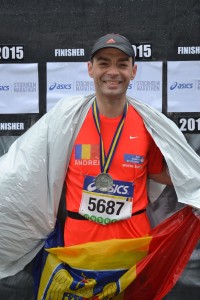 According to the official result I was the first Romanian runner (8 finished the race) and also from what I saw, only 2 Dutch runners (71 finished) were faster than me. I’ve finished on the 975th place overall, which is not bad for a programmer training only 3 times a week.

Below is a short video recorded by my paparazzi during the race and also the Strava activity for my race.

To conclude this, I loved the race course – Stockholm is a really beautiful city and the race course does a great job of showing the best of Stockholm to the runners. Also, despite the bad weather there were lots of spectators everywhere cheering and creating a nice atmosphere. The only minus was the weather which the organizers can’t control anyway… It was overall a really well organized race which I’d recommend to everybody in case you didn’t run it yet.

Til next time, happy running everyone!